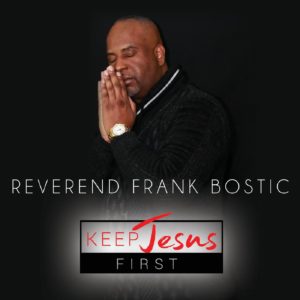 Reverend Frank Bostic grew up in Buffalo, New York, and has been singing before he could talk and writing music from an incredibly young age. As he grew older, he realized music was a part of his DNA. He says, “I feel music is one of the many God-given blessings in my life.” Through using visualization, it was easy for him to create music by connecting words and musical notes.

In 2003 Reverend Frank Bostic accepted the call into the ministry. His education began with the Pastoral Care Ministry Program at Houghton College, West Seneca, New York. He obtained his license and was ordained by Rev. Dr. Robert E Baines Sr. He also attended Southwest Baptist University, Bolivar, Missouri during his earlier training years. In January 2012, he received a Master of Religious Studies degree at the National School of Theology, in Dover, Delaware. Currently, he is enrolled in the Pastoral Care, Counselling and Psychology Program at Trinity College and Seminary, Newburgh, Indiana, preparing for a Master of Divinity degree.

Reverend Frank Bostic is truly a man sent by God to preach and teach the message of Christ to a dying world that they might be saved. His life experiences are not like most but is a living testimony to those in our culture whose lives need to be saved. “There’s nothing like a good hymn to lead you into delivering God’s message. I literally incorporate music in everything that I do, and I can’t think of a day when music was not a part of my life. I feel like it elevates God’s word in a way which words cannot convey,” said Reverend. Bostic.

“I wrote the song “Keep Jesus First” out of pain when I started my journey to Christ. However, I also wanted to tell Jesus, thank you, for bringing me out of a life of darkness.” Then, I thought it is the perfect theme and song title to capture the essence of my teaching, fellowship, and outreach ministries. From then on, I proclaimed that I would “Keep Jesus First” in every aspect of my life.”

As the spirit would have it, “Keep Jesus First” is the song title of Reverend Frank Bostic’s first single to be released. Its uplifting rhythmic style and sound will have you singing, praising, and holding onto your faith. Reverend Bostic loves all genres of music, and there are several musical icons who he has looked up to and imitated his style and sound around: The O’Jays, Gerald Levert, and Grammy Nominated Producer, Artist Glenn Jones, of course. In addition, the legendary Sam Cooke and one of the greatest gospel singers of our generation, Aretha Franklin.