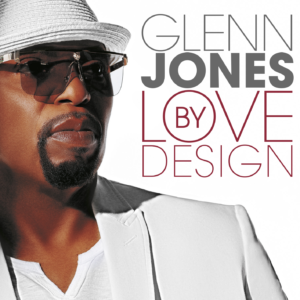 Besides being one of the music industry’s most extraordinary vocalist, Grammy Nominated Recording Producer, Artist and Actor, GLENN JONES is at the top of the list as a love song balladeer capturing audiences’ hearts with his own unique, style and voice. Mr. Jones is also underway with the launch of his new company Talent Room Entertainment and Publishing, Inc. which will release “Love By Design EP.” his next musical project.

The newest single from the EP “Trust In Me” is scheduled for release during June Black Music Month, and it features renowned gospel artist Genobia Jeter. The song has a soulful and inspirational melody that will have you out of your seat praising and giving thanks.  Additional singles to be released from the album this Fall includes two up-tempo songs titled “Cook-Out” and “Family Time”. They are co-written and produced by the multi-talented Chuckii Booker.

The first single release was “Love By Design”, and it features Grammy Award winner Regina Belle. The song hit the Billboard Smooth Jazz Charts as #1 Most Added Smooth Jazz Vocal Record In The Nation. “Love By Design” was written by James Day and produced by renowned jazz producer Chris “Big Dog” Davis.  This was also the first release from the independent record label, Talent Room Entertainment.   The “Love by Design” single showcases Glenn’s signature tenor and upper register while distinctly pairs with the richness of Regina’s vocals. Their incomparable vocals are perfectly matched with James Day’s melodic lyrics, leaving listeners with a harmonious ballad.   This marks the legendary R&B pair’s second duet after 2001’s “From Now On”.  The second single released from the EP was “You & Me” which proved to be an excellent Stepper and Hand-Dance song for all the movers and shakers listening in.

Glenn Jones is still one of the most sought-after live performers in the music industry today with many chart-topping hits, including his signature songs. Jones voice penetrates the soul thru music and lyrics.  Once you’ve heard “Here I Go Again”, “We’ve Only Just Begun (The Romance Is Not Over)”, “Baby Come Home”, “I’ve Been Searching”, “Show Me” and “I Wonder Why”, chart topping hits from this gifted artist, there is no doubt that your soul has been touched.   Jones has shared the stage with many industry greats including Dionne Warwick and Aretha Franklin.

No stranger to pen and paper, Jones received a coveted Stellar Award for his crafty lyrics, superior vocals and for lending his production talents to the gospel quartet, Canton Spirituals (Verity Records), garnering favorites, including “Never Let Go” and “They Need to Belong”.  In conjunction with his writing, producing, recording and performance schedule, Jones added acting to his repertoire. Between album projects, he joined the casts of both “The Devil Made Me Do It” and “When a Woman’s Fed Up”, touring across the nation for nearly two years. “We performed eight shows a week and I gradually saw my skills improving,” he notes. “Learning to act has been great training for me as a performer.”

Jones has had the opportunity to display both his talents and his patriotism, as he toured Iraq and Kuwait performing for the troops who fight every day to protect our freedom.

“Designed to reach a wide group of people” is how Jones describes his music.  He sometimes observes the people at his shows; they range from 30 – 60 and Jones knows they are there because he is true to what he has established; a meaningful lyric, great melody, and a very soulful and sincere sound.

A native of Jacksonville, Florida, Jones fondly recalls, “Since the age of 4 or 5, I’ve always loved music.” Reared in the Pentecostal church, he often found himself risking punishment just to sneak a listen to the secular sounds of Stevie, Bobby, Marvin and Donny, in particular. Heavily influenced by the sounds of the time, Jones formed his first group, “The Modulations,” at the age of fourteen and was later discovered by the late, great gospel legend, Reverend James Cleveland.

Although he initially made his mark in the gospel arena, Jones’ voice caught the ear of acclaimed musician, Norman Connors, with whom he toured and ultimately began performing R&B music.  Having officially made the transition from Gospel to R&B, Jones joined the roster at RCA Records.  Four years later, he signed with Jive Records and enjoyed success with his self-titled album, which spawned the hit singles, “We’ve Only Just Begun (The Romance Is Not Over)” and “Stay,” respectively. His move to Atlantic Records produced contemporary up-tempo hits “Here I Go Again” and “I’ve Been Searching (Nobody Like You)”.  During 1998, Jones signed with SAR for the independent release of “It’s Time”, which sold nearly 200,000 copies, via a combination of internet, event and retail sales. In addition, the album included the hit single “Baby Come Home”, a Top 5 R&B single that was one of the Top Ten Most Played Records for 2000, according to Billboard Monitor. Jones was overwhelmed by the success of this project and feels blessed to have an underground fan base that has sustained his career for over two decades.

In a recent radio interview Jones tells the story about being backstage at a concert in Chicago. He was having a conversation with Peabo Bryson. Peabo told him Luther Vandross said, “There are only three R&B Crooners, Luther, Peabo and Glenn Jones. I was like wow, really.”

Marketing, imaging and sleek packaging aside, GLENN JONES clearly understands the dynamics of creating a solid vocal performance and has consistently delivered.  “I’ve been in the game for over 30 years, and I am blessed to still be doing my thing. I owe it all to the creator.  My mother told me two things that I’ll never forget, and that is, my talent would make room for me, and that my life is in God’s hands, and I believe that.”

Jones is also the founder of his non-profit, The Love Jones Foundation (LJF), established in memory of his mother-Ella Lee Jones. The foundation provides educational programs to youth and music therapy to the elderly. For more information or to donate go to www.lovejonesfoundation.org.

Visit and Join Glenn’s VIP Fan Club, review his upcoming tour dates, social media pages, and website www.glennjonesmusic.com. Talent Room Entertainment (TRE) is a new independent music, film, and media company founded in 2018 by Glenn Jones and is based in Atlanta, GA. TRE is excited to be home to talented music and movie producers, musicians, vocalist, actors, and writers. The TRE label celebrates the release of its first music project titled “Love By Design.” 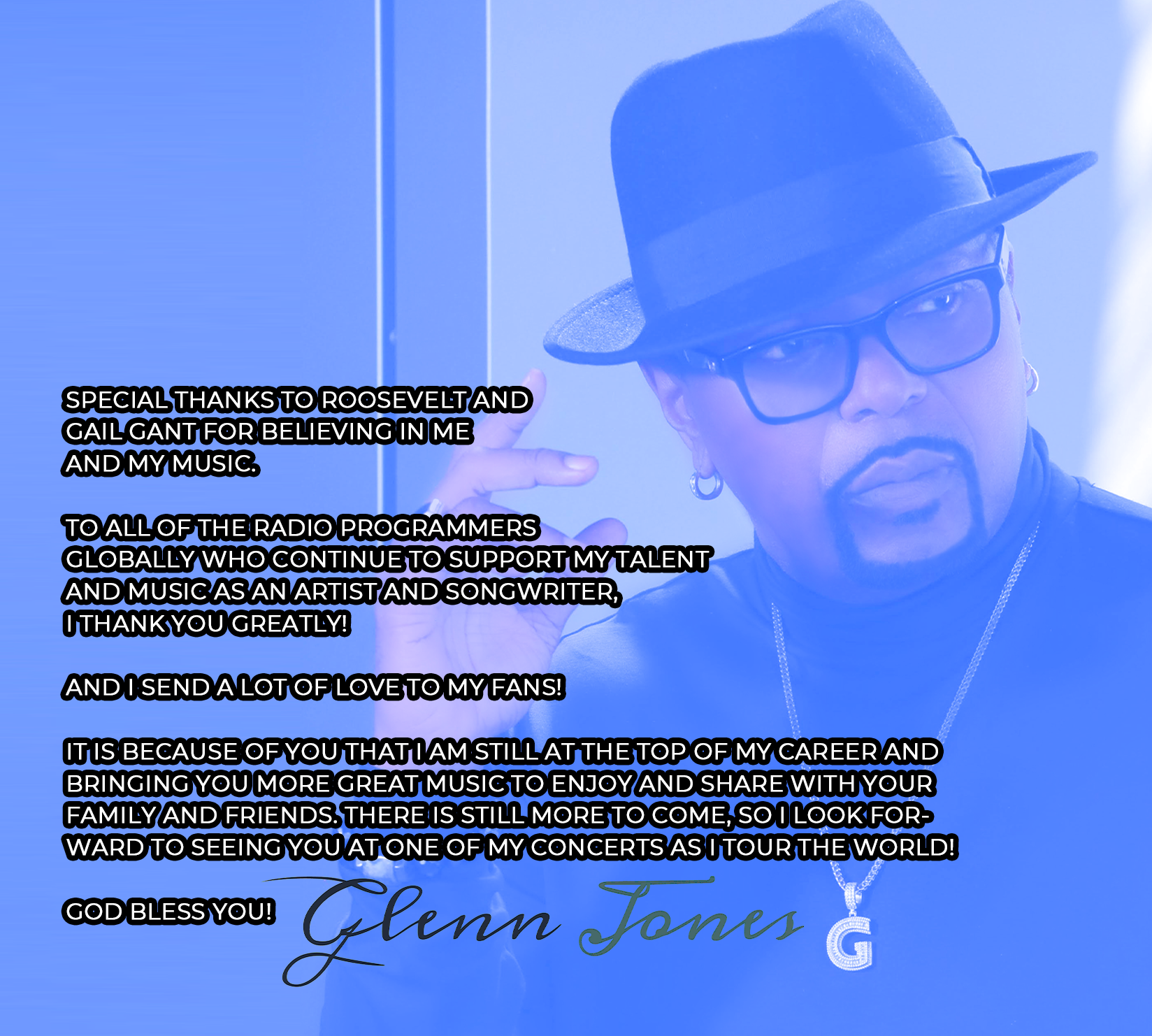 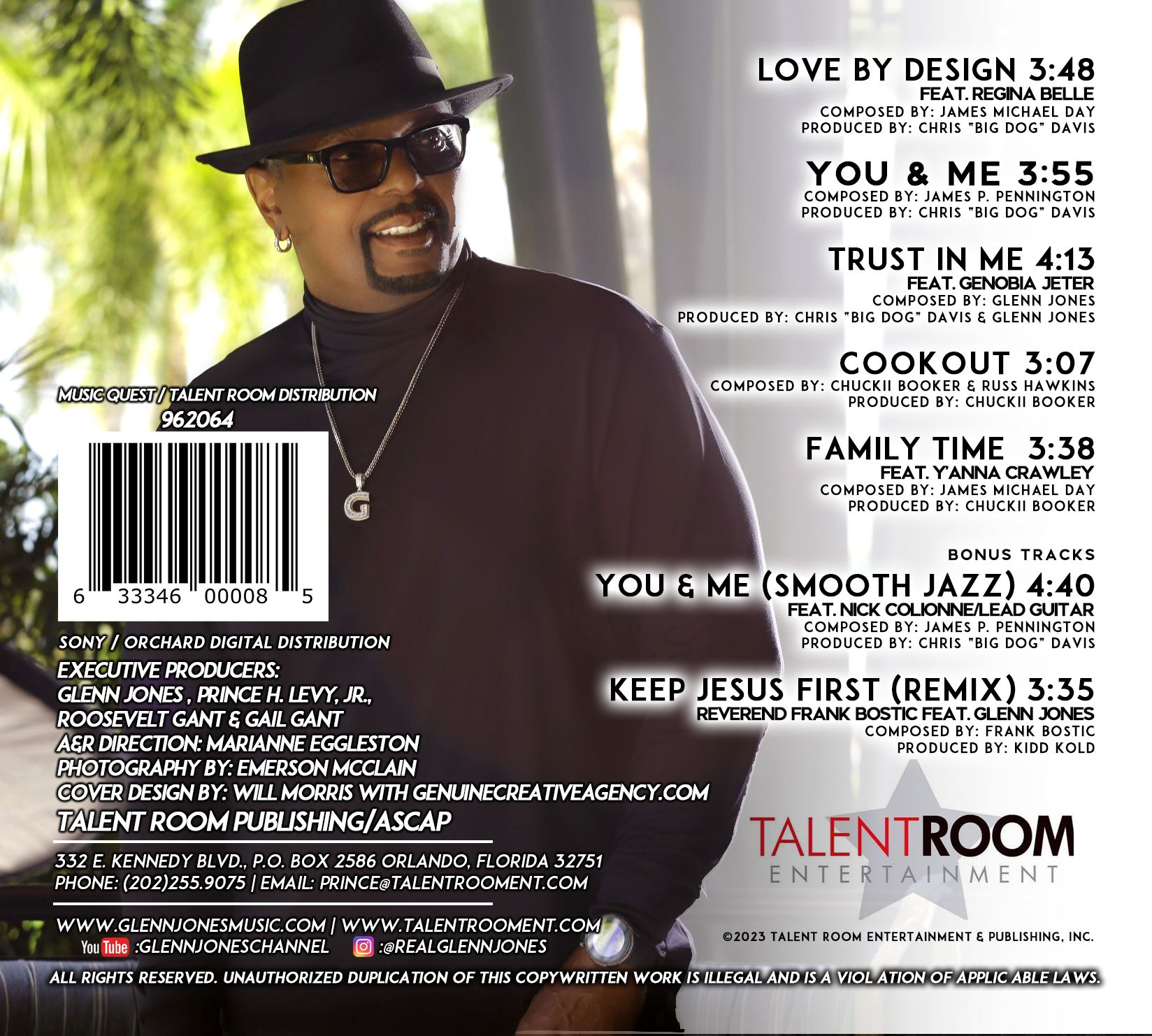 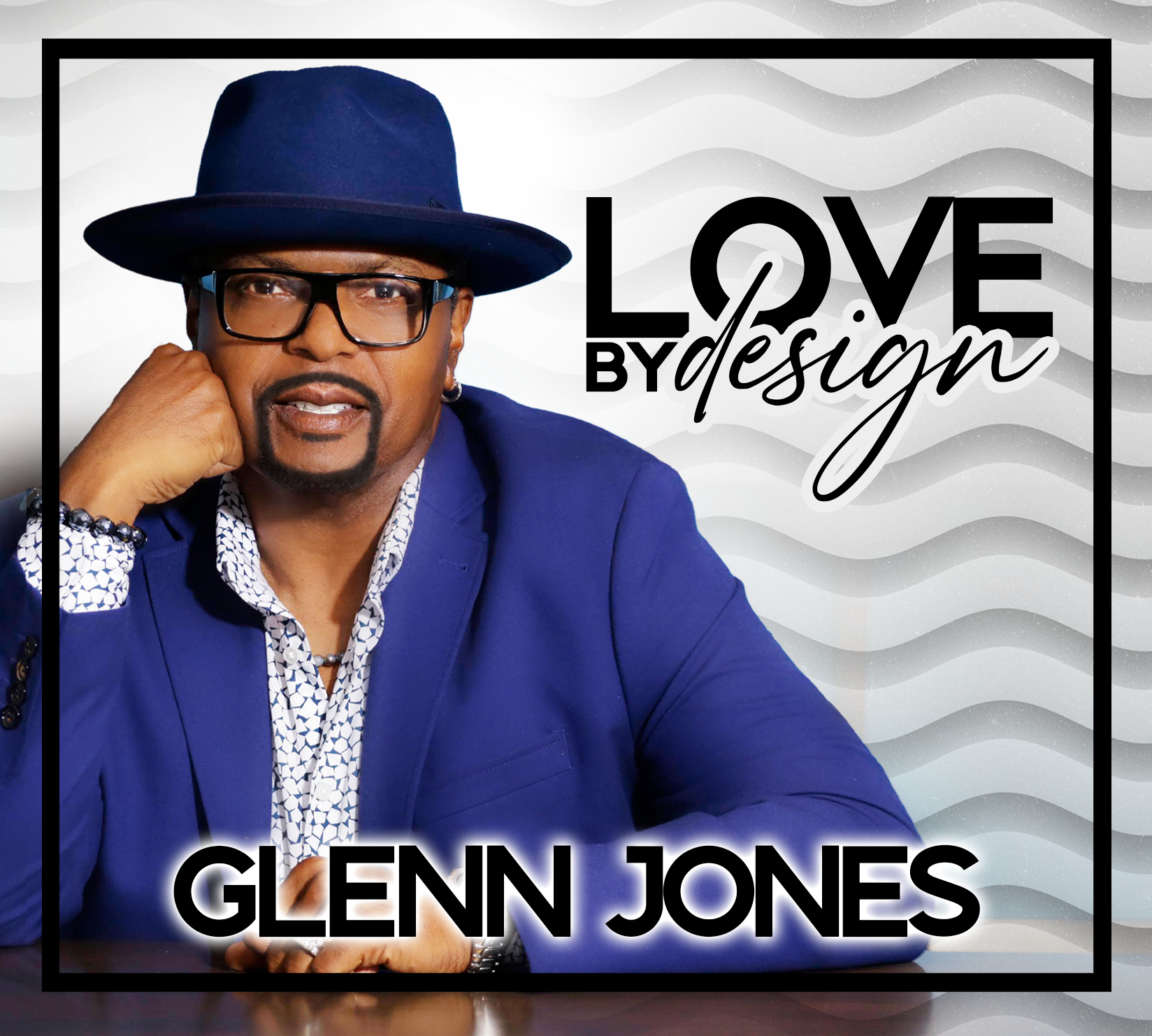 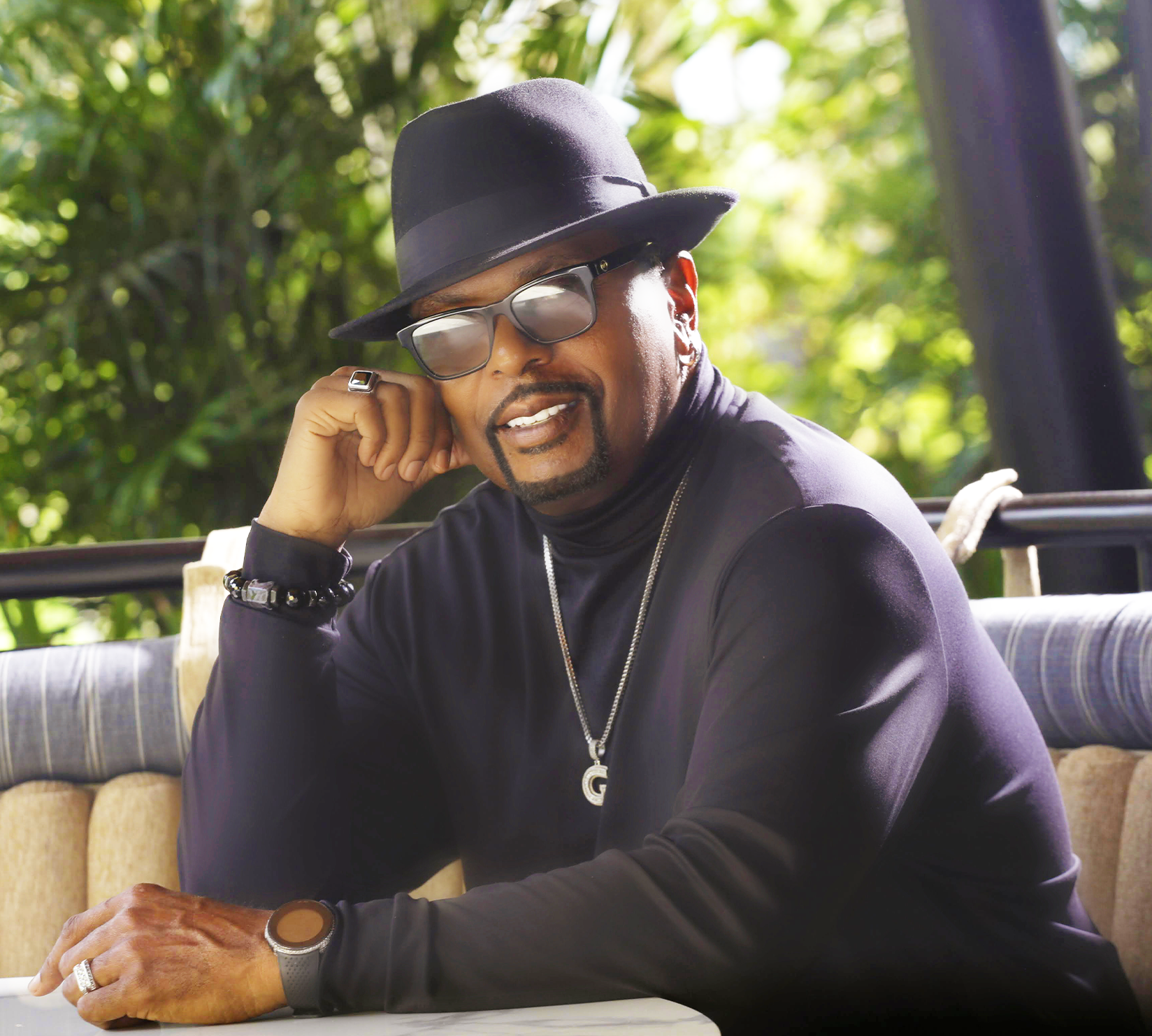 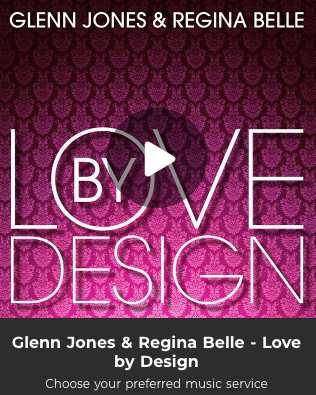 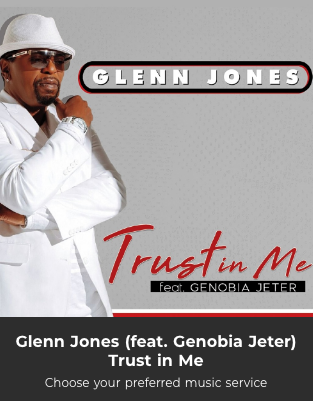 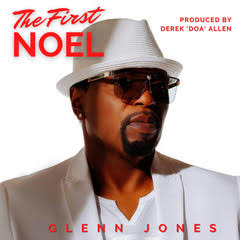