Tae Wall’s latest single “Scholarship” is the first of many to be released through SONY/ORCHARD under the Talent Room Entertainment and Publishing, Inc. (TRE) imprint based in Atlanta, GA which is owned by Glenn Jones, Grammy Nominated Recording Producer, Artist, and Songwriter.

“We are excited about signing Tae Wall to the TRE roster. He is rising through the industry as a major Hip-Hop Artist and has proven his creative style as a writer, producer, and 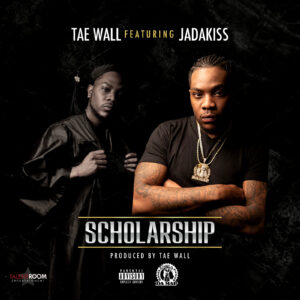 entertainer can move and inspire audiences globally,” said Prince Levy, president of Talent Room Entertainment. As an independent artist, Tae has consistently released music and videos which has also pushed the brand which he co-founded, Da M.A.P (Money and Power) with childhood friend Mac Spitt in 2016.

Clearly impacted by his older brother, Tae Wall lists his other musical influences to be Bone Thugs- N-Harmony, largely, and Lil Wayne, just to name a few. Tae stepped into the world of acting by co-starring in the movies “Clique” and “Brah Brah”. He played the title role in “Jaysin the Series” where

his performance was critically acclaimed. In between roles, this triple threat entertainer takes no breaks. He has been on tour around the
country performing in Louisiana, Michigan, Massachusetts, Georgia, California, and New York. Tae Wall also appeared in an episode of “Basketball Wives LA” in May 2019. His prior hit singles “Baby Girl”, “Truly Are” and “Moves” have been making waves on the radio in Cleveland, Cincinnati,
Columbus, and West Virginia.

There will be additional music and videos from Tae Wall, so make sure you stay tuned and visit the Talent Room Entertainment website www.talentrooment.com. He’s on the move!